The Man In The Mitten

My Alma Mater is in the market for a football coach.  If you know anyone good, send the Athletic Director their resume.  I went to the University of Michigan several moons ago, so I'm interested to see how this whole thing shakes out.  As a student, I was a manager for the men's basketball team, and then was fortunate enough to work in the athletic department after graduating.  Despite being a New Yorker by birth, after spending seven years steeped in Michigan athletics maize and blue now courses through my veins.  My love for the school and the opportunities that it afforded makes me want to see them prosper.  And like many interested parties I want to see it now.  Unlike most, however, I'm willing to wait and be patient as long as the right hire is made; so I watch the coaching with bated breath.

There is, however, one term that has been bandied about fairly recklessly during the search process:

First famously uttered by the most heralded of Michigan Men, Bo Schembechler, in 1989; it's now brought up any time that a coaching position in one of the revenue sports (e.g., Men's basketball, football) needs to be filled.  Look, when Bo spoke in Ann Arbor, people listened.  It didn't matter how far removed he was from his coaching days or his time as the AD, he made E.F. Hutton look like a mute.  I had the fortune of meeting Bo a couple of times during my seven years in the athletic department; and while he wouldn't be able to pick me out of a lineup (admittedly I was pretty insignificant to him), you couldn't deny the overwhelming Michigan presence that practically emanated from him.

Case in point: During the Michigan softball team's 2005 National Championship run, they hosted the Super Regional against Washington.  For those unfamiliar with how things work in Division I collegiate softball, the Super Regional is the round right before the World Series.  Eight Super Regionals are played, and the winners of these best-of-three series go Oklahoma City to compete for a National Championship.  After splitting the first two games, Michigan, then ranked #1 in the country, was playing to extend its season.  I was working for Michigan at the time and decided to take in the game with a fellow staff member.  The home nine found themselves in an early hole as Washington jumped out to a first inning 2-0 lead.  Then, the coach I was watching the game with tapped me on the shoulder and said, "look who just walked in."

I turned to see Bo Schembechler making his way through the bleachers with his wife looking for a seat.  The stands were parting for him like the Red Sea, and it seemed like everything on the field stopped until Bo found somewhere to roost.  Although what is about to follow seems like it's been adapted for some cheezy Disney movie, but I assure you it's true.

From the time Bo sat down, Michigan scored eleven unanswered runs and won the game in six innings, invoking the run rule and sending the Huskies home early.  Can I unequivocally say that the aura of Bo propelled Michigan to victory?  Not exactly, I don't have any tangible evidence that would support that theory.  But if I found myself having to testify about this under oath for some bizarre reason, I'd definitely give him the assist for that win.  But nobody needs me to dub Bo Schembechler as the quintessential Michigan Man.  Anybody who had the opportunity to share the same space as Bo for even a scant few minutes could easily see that the man inhaled Maize and exhaled Blue.  Not to mention the fact that he carried himself with the honor and dignity that one of the world's largest alumni bases would expect from someone representing their institution.

And amazingly, Bo had no prior connection to the university before being named its head football coach in 1968.

Yeah, I realize that's not a news flash.  But I say all of that to say this: To me, being a Michigan Man has less about where someone cut their teeth, but more about the content of their character.

All of this assumes, of course, that a candidate is qualified to be the face of college football's winningest program in the first place.

Much of the national fuss about being a Michigan Man has centered around hiring a coach who had already spent time in Ann Arbor as either a player or assistant coach.  Many have asked some form of the question "is Michigan doing itself a disservice by focusing on bringing in a Michigan Man?" If that's the criteria, then I say yes.  But if the best candidate for the job just happens to have Michigan ties, then that's just gravy.  But I was just a tiny cog in the complex machine of Michigan Athletics; so don't take my word for it: this guy won a Heisman Trophy for the program.

Bo wasn't a Michigan Man when he set foot on campus, but he became one.  I'd like to think that I, too became one and whomever is hired as the 19th head coach in the 132 year history of the program will have the opportunity to grow into one if he isn't one already.

And even though I haven't exactly written glowing things about Les Miles in the past, if he's the guy I only hope someone tells him that it's not grass, but field turf in Michigan Stadium.

But if I had my druthers, I wouldn't mind seeing this guy roaming the sidelines in the fall... 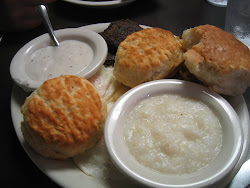 Grits Master
Once upon a time, I had another blog (inbox me with credentials as to why you're worthy and I may share the link with you...), but I've reemerged here.

I'm a magnet for strange people and plan on sharing many of those encounters in this space.

I'm also pretty passionate about sports, and plan on sharing opinions and random tidbits here. I've spent several years with a major Division I basketball program, so I have a slightly different perspective than most.